Vladimir Ponkin doesn«t require any additional introduction. Today he is one of the most reputable and highly demanded conductors in Russia and in the whole world, a thoughtful artist and a fine professional. Many articles have been devoted to him, and his numerous interviews show the master»s seeing of the world, art, and the occupation of a conductor.

The master class of Vladimir Aleksandrovich Ponkin — professor of the Opera and Symphonic Conducting department of the Moscow State Conservatory, a People«s Artist of Russia, Head of the Orchestra Conducting department of the Ippolitov-Ivanov' State Music Institute, principal conductor of the Moscow Music Theatre «Helicon Opera» — took place in April of 2015 and was held in two stages: the first part of the class for future conductors took place in the flat-museum of Golovanov, and the second part — in the Ippolitov-Ivanov State Music Institute. This was a MASTER-class in every sense of the word — brilliant, witty, filled with life and energy, with the improvised ease, the simplicity and accuracy of the thought, with vivid colorful comparisons, with the wisdom of an experienced teacher unlocking his professional secrets. And the master-teacher is as fine as the master-conductor. 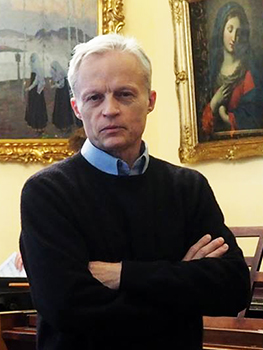 Every professional must bring up the youth. If you have a slightest chance, you ought to try and take a teacher«s occupation, as it helps a lot.

The profession of a conductor is a complex system, a fusion of completely different occupations in one.

Psychologist. A conductor as no one else should master psychology. It is a vital subject for a conductor. If you cannot identify the potential capabilities of the orchestra by the very first chords, you will have to make more effort, you will be lost, and you will seek contact with the orchestra. And if the contact is not found, that is a fiasco.

The next crucial skill proceeds from the above said: the ability to communicate with the musicians. Depending on the orchestra«s class the demanding manner can be switched to a different tone of addressing. One must not address the musicians of the high-class orchestra in an arrogant manner. The difficulties of this kind often happen not because of the unwillingness to treat them as equals, but because of the nervousness. In such a state a conductor tends to do the things he would never do in a calm psychological state.

If a conductor thinks of the orchestra as an instrument, no good will come out of such a contact. I recall the words of Gennadiy Rozhdestvenskiy who said «The orchestra is not an instrument, not a set of keys, but a community of creative, completely mature individuals, who can not only react to your offer (which is a system of symbols, not only manual, that the orchestra reads), but also propose their own view, which is immensely important».

In 1962 after a long break Stravinsky came to Moscow on tour. Svetlanov was preparing «The Sacred Spring» with the State Orchestra for him. I. Stravinsky came up to the orchestra and conducted. The orchestra played brilliantly, and Igor Fedorovich said: «Well, they read the sheet music quite well. Now let»s get to work». This is an example of a situation when the orchestra makes an offer. Diplomacy is vital here, the ability to build the relationship with the orchestra. You must never «drown» or humiliate the musician. You should compliment and correct the member of the orchestra in such a way that he feels he can do whatever the conductor requires of him. This is one of the main principles: first you compliment, and after that you correct. Sergey Rachmaninoff once produced a wonderful phrase: «An artist needs three things: praise, praise and more praise». And in the meantime you should correct, if you have a moral right to do so, of course. 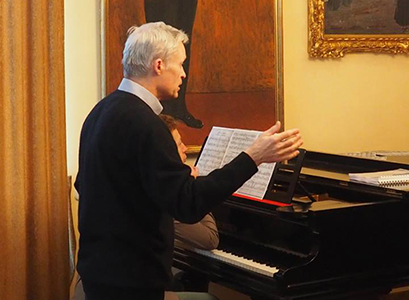 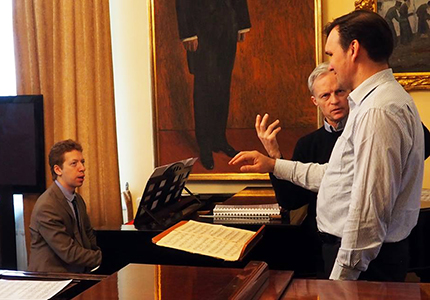 As for the hearing, many young men who are confident that they deserve to do the job do not have one of the most important qualities, the hearing. The hearing must be absolutely refined, as refined as possible. Any member of the orchestra, feeling unnoticed, feeling he is out of your hearing attention, will work wonders! You can be artfully put to the test by a note that«s out of tune. Such things must be stopped at once in order to prevent such tests.

The relationship with the members of the orchestra is significant. The musicians should never notice the duration of the rehearsal. If it seems too short to them, you are doing it right. If the piece you have learned and prepared for the work with the orchestra seems too short, that«s good as well.

We can speak of the work with the sheet music separately. But it is worth mentioning that the approach to the sheet music should be from a «bird»s-eye view». And you ought to approach the piece countless times up to studying the details with a microscope, and then you should drift away. It corresponds to one principle in art and science, deduction and then induction.

Concerning a conductor«s character, a conductor must be just and merciful. But he must be merciful in a right sense of the word, you mustn»t pity, you mustn»t forgive a betrayal, you mustn»t flatter. The musicians love to be praised, but you should compliment constructively, for the benefit of the cause, for the benefit of the quality of performing the piece. Concluding on the human qualities, I»d like to say that you have to love people. One mustn»t act superior than his status allows.

As for the professional skills, what is a motor system of a conductor«s apparatus? It is not only the hands, but also the legs, the core, the head, the angle of the turn, the broad panoramic vision. The latter is needed so that you could know what the double basses are doing while you are looking at the flute. The only person who needs this is you.

The hands in the conductor«s art are the ultimate authority, the most vivid, the most expressive, but the last one, because everything is formed in advance inside you, the wish to show and the capability to match the foot of the ballet soloist. Ballet is the most challenging genre in the conductor»s art of accompaniment.

As for the manual technique, the conductor«s hand is not even like a bird»s wing. The hand is more similar to a fish tail, it»s very flexible, charming, but it»s always on the move except for the fermatas. The slightest deflections from the right motion path of the wrist or the fingers, the excessive elbow motion create numerous opportunities for one part of the musicians to follow the wrist and the other — the elbow.

And, finally, the basic professional secret is the subdividing within the beat. If you feel that some specific passage is played unevenly, check yourself using the natural pendulum motion. If you take a right natural pendulum motion and the motion of the metronome hand, it will be easy for you to conduct the orchestra accurately. This is the main professional secret which is not mastered by many, and if you don«t use it, the problems will follow and will increase exponentially.

A conductor is a brilliant personification of the act of provocation! Remember that, and you will succeed in many things.