The master class of Vladimir Aleksandrovich Ponkin — professor of the opera and symphonic conducting department of the Moscow State Conservatory, a People«s Artist of Russia, Head of the Orchestra Conducting department of the Ippolitov-Ivanov' State Music Institute, principal conductor of the Moscow Music Theatre «Helicon Opera» — took place in April of 2015 and was held in two stages: the first part of the class for future conductors took place in the flat-museum of Golovanov, and the second part — in the Ippolitov-Ivanov' State Music Institute.

In the first part of the master class Vladimir Aleksandrovich dwelled on the special features of the conductor«s occupation and analyzed its components, emphasizing the crucial aspects of the relationship between the conductor and the members of the orchestra, and spoke on the professional qualities and secrets. The second part is no less informative and is as helpful for the future conductors. It can also provide the musicians of any specialty with an example of artistic freedom in its educational hypostasis.

This master class is a continuation to the previous one, which took place in Golovanov«s museum.

The discussion was about the conductor«s clothing, because the harmony and the adequacy of the clothing is an important part of the success. A conductor is commonly thought to be a men»s occupation. Although a female conductor can use some advice concerning the conductor»s outfit in general. Striving for a men»s strict style in the clothing is quite appropriate at a concert, it disciplines both the conductor and the members of the orchestra. 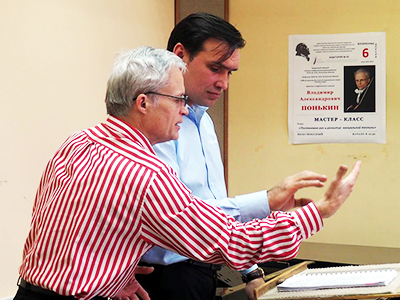 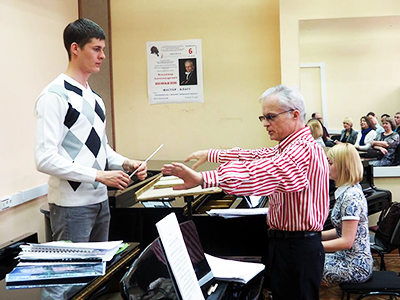 Any professional learns from the first steps how to hold the right and the left hand, how to develop the proper motion direction. It is a base for professional advancement of any person who wants to become a conductor. Otherwise no musician will give you an easy time, for there is a certain antagonism in the conductor-orchestra relationship. The law of the opposition comes into effect, the personality versus the society. If the people see that a poor professional is trying to conduct them, they want to get rid of such a leader. In the meantime, the purpose of art is to achieve harmony, for it touches the listener. The harmony cannot be reached without the unity of opposites. These are the basic points concerning the orchestra-conductor relationship. We spoke about it in detail during the previous master class.

After that there was a skill building session with the students. I gave some advice on mastering the conductor«s skills and analyzed the beginning conductors»typical mistakes on concrete examples.