In the beginning was the Word… And the word was quite informative, helpful and witty. Interweaving into the action in organic and natural manner, the word followed the conductor’s gesture, describing the action in an emotional, accurate and capacious way. The music was leaded by the word and the gesture, and the action acquired a deep sense and a complete form. It was all boringly called a master class. Both the word and the gesture were aimed at a result. And Professor Vladimir Ponkin, the principal conductor of the theatre “Helicon Opera”, the People’s Artist of Russia, always achieves the result. Vivid, lively, filled with improvising, joyful and positive, the maestro’s master classes are a powerful drive for all who think they deserve a place at the conductor’s stand. And so were the sessions with the students-conductors of the Conservatory of Nizhniy Novgorod. 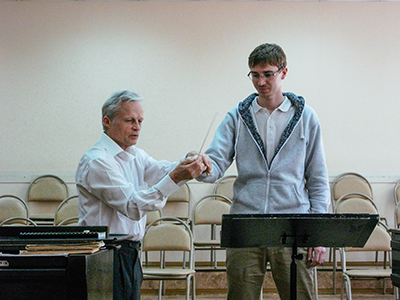 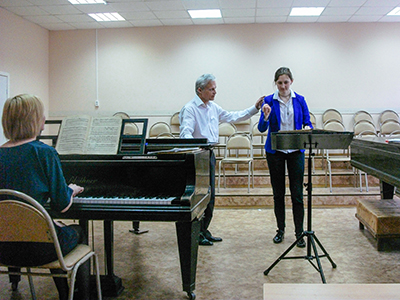 As all clever and professionally established people, Vladimir Ponkin is very open and simple in contact. He totally lacks the fancy “star” behavior, which is common among show business representatives and some academic musicians. The author of this text hadn’t prepared any questions in advance, and the meeting that happened was another wonderful improvisation of the musician, whose master classes in Moscow have recently been given to our publication. In common opinion, such an unprepared conversation appeared to be even livelier and more natural. 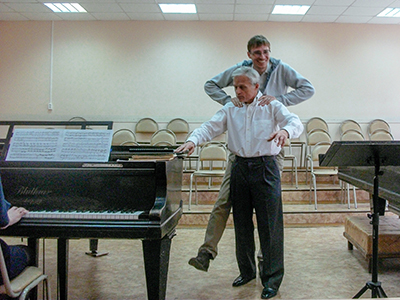 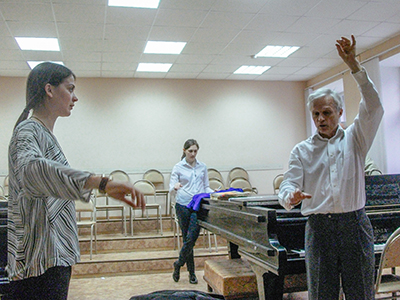 After the master class we couldn’t help but discuss the general state of the music education, which is enduring hard times. This is a painful and multi-aspect topic which disturbs everyone who is connected to education. The increasing volume of the boring paperwork, which is able to put out any creative enthusiasm, the decrease of the culture level of the students and teachers of music are our life’s sad reality. Nevertheless, V. Ponkin is an optimistic man, and he sees the future of the classical music renewed. The evidence of that is the comeback of the instrumental and symphonic music into the filmmaking. By the way, the conductor has productively worked in filmmaking for many years.

Is there a better person to discuss the tendency of innovations in the classical opera production than a theatre conductor? There was a lot of argument around the new interpretations of the Mariinsky, of the Bolshoi, of the European and some peripheral Russian opera theatres. The fine border existing between the new, but respectful view of the old plot and the innovation for the sake of the innovation is not always observed by the directors, who want to draw the attention with prejudice of the composer’s idea. In this connection, the problem of the balance in the director’s and conductor’s work was curious. Vladimir Aleksandrovich gave many funny examples of how he had to refuse to work with the directors who got lost in the notorious “What if?” game. Vladimir Ponkin has pointed out that there is one director he can trust completely, and that is Dmitriy Bertman, the artistic director of the “Helicon Opera”.

Besides his work in the theatre, Vladimir Aleksandrovich has conducted the Kuban Symphony Orchestra for many years, and he speaks of it with great affection. Over the years the orchestra has improved in terms of performing, and complex academic repertory is now within their reach. Speaking on his work with different symphony orchestras, the maestro called the orchestra of the Philharmonic Society of Nizhny Novgorod very responsive to the conductor’s idea. Besides the fragments of the opera music by P. Tchaikovsky, the orchestra is performing “Manfred”, a most complex symphony in terms of conception. The author was lucky enough to attend one of the rehearsals. And it is a master class of the first water!

More about the rehearsal in Concerts.